Love is Calling at the ICA/Boston

An icon of contemporary art, Yayoi Kusama has interwoven ideas of pop art, minimalism, and psychedelia throughout her work in paintings, performances, room-size presentations, outdoor sculptural installations, literary works, films, design, and architectural interventions. Kusama came to New York City from Japan in 1957, joined the downtown avant-garde art community, and developed a style that embraced repetitive mark-making and organic patterns and forms on canvas, ultimately expanding to environmental creations after 1962. Her first mirrored environment, entitled Infinity Mirror Room—Phalli’s Field (1965), signaled a commitment to materially and socially immersive work as her traditional studio practice slowed in favor of protest events, performances, and happenings. Uniquely, her art-making broadens and evolves in tandem with the cultural, political, and visual revolutions of the psychedelic sixties. She returned to Japan in 1973 and for the next 25 years focused on writing and publishing poems and novels. In 2000, Kusama constructed Fireflies on the Water, her first darkened infinity room, and in 2013 she premiered Love is Calling in Japan. 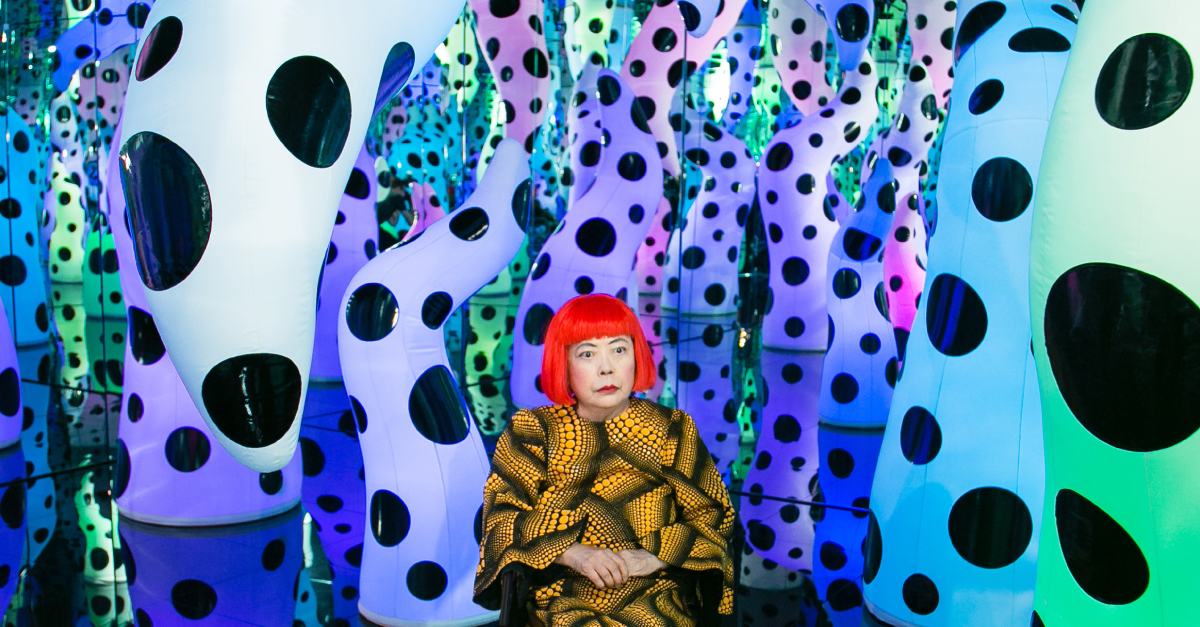 Yayoi Kusama sitting in “Love is Calling” during her solo exhibition at David Zwirner in New York. (Courtesy David Zwirner)

Love is Calling is one of Kusama’s most immersive, kaleidoscopic environments and represents the culmination of her artistic achievements. It exemplifies the breadth of the artists’ visual vocabulary—from her signature polka dots and soft sculptures to brilliant colors, the spoken word, and most importantly, endless reflections and the illusion of space. It is composed of a darkened, mirrored room illuminated by inflatable, tentacle-like forms—covered in the artist’s characteristic polka dots—that extend from the floor and ceiling, gradually changing colors. A sound recording of Kusama reciting a love poem in Japanese plays continuously. Written by the artist, the poem’s title translates to Residing in a Castle of Shed Tears in English. Exploring enduring themes including life and death, the poem poignantly expresses Kusama’s hope to spread a universal message of love through her art.

The largest of the 20 existing infinity rooms, LOVE IS CALLING is the first infinity room held in the permanent collection of a New England museum. In 1966, the ICA exhibited an Infinity Mirror Room, now titled Endless Love Show, in the exhibition Multiplicity, and the museum also owns a 1953 drawing by the artist.