Conversations about the climate crisis usually revolve around maps, data, and statistics. While these numerical metrics are incredibly useful, they can inspire fear, uneasiness, and even confusion. Art, on the other hand, is not typically centered in climate discourse; it might even seem antithetical to incorporate art into knowledge-based scientific understanding. But science must be communicated, and art is one of humanity’s best communication tools. Art is deeply emotional. It can motivate a range of feelings beyond fright and apathy, and cand inspire real action.

Positive attention and action are the goals of East Boston’s newest public art project, Sea Walls: Boston. HarborArts is an East Boston-based initiative which fosters dialogue through the creation of public art on the Eastie waterfront and beyond. In 2020 and 2021, they partnered with Sea Walls, a PangeaSeed Foundation program that “brings the oceans into the streets” in nations around the world, sponsoring large-scale murals which address pressing environmental issues. Together, HarborArts and Sea Walls facilitated the creation of 21 murals over the course of two summers: 19 of them in East Boston, one at the New England Aquarium, and one outside Fenway Park. This public art project intervenes in the everyday lives of passersby, asking them to think about the future of our oceans and the impact of our choices on the environment. In addition, they beautify some of East Boston’s historic buildings with breathtaking artwork that stops viewers in their tracks.

At the project’s genesis, HarborArts identified artists both local and international and offered them a “topic deck” of potential subject matter. Each artist selected their top three mural ideas, and once they received their final topic, they got to work drafting. In 2020, seven murals were painted by artists from the Greater Boston area; this was considered a “pilot” version of the project, and it succeeded despite operating under the pandemic’s toughest conditions. In 2021, the project continued, and the remaining 14 murals were completed over the course of 10 days. 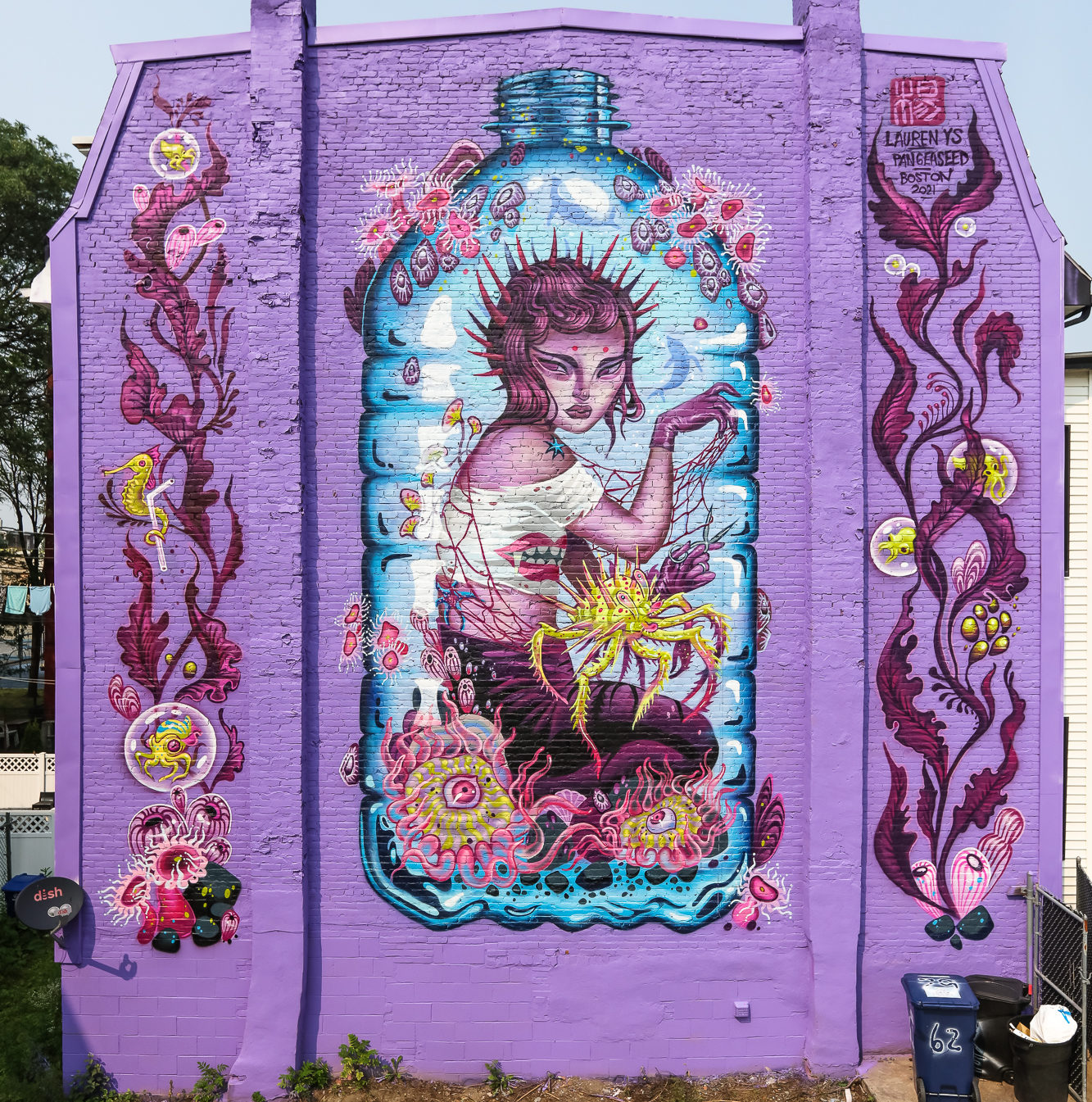 An East Boston neighborhood favorite from the mural project has been dubbed “the purple wall” for its striking lavender wash. Lauren YS is a Los Angeles-based artist who creates work inspired by dreams, mythology, animation, and their Asian-American heritage. They have also painted for Sea Walls in New Zealand. Their contribution to the East Boston project is titled Plastic Pandora, which depicts a mythologically-inspired sea character trapped in a plastic water bottle, cutting themselves and their fellow creatures out of a net. On the piece’s name, the artist says, ”’Pandora’ references the Greek myth of the box opened to reveal all the evil in the world, paralleling the expediency of plastic’s detrimental effect on the air, water, and intersectionally disadvantaged communities of the world.” Painted entirely free-hand by Lauren YS, this mural transforms a privately-owned apartment building into an extraordinary shared reminder of diligence in consumption for the neighborhood and its visitors. 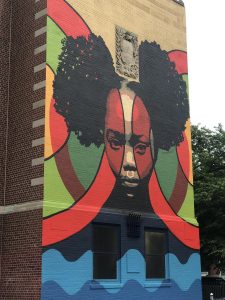 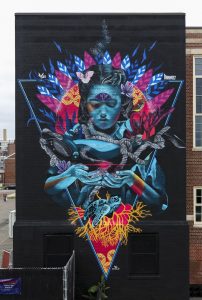 In part due to the cooperation of Boston Public Schools, two of the largest murals in the project depict the role that children play in the future of our climate. These murals overlook the main schoolyard of McKay K-8 School: Marka27’s Espíritu del Mar (above left) and Nneka Jones’ Intersectional Environmentalism: Generational Uproot (above right). Marka76 calls his aesthetic “Neo Indigenous,” combining his Mexican and indigenous heritage with a pop cultural, street art-based artistic vocabulary. Espíritu del Mar depicts the artist’s daughter, looking reverently upon an endangered whale trapped in fishing nets. Regarding his contribution to the project, Marka76 said, “I wanted the children who attend the McKay school to see themselves in this mural by painting an indigenous girl but I also wanted to show the youth that we must treat our planet and all life with respect and empathy.” Across the courtyard from Espíritu, another young girl stares out at the playground, engulfed from the bottom by deep blue waves and from the sides by overlapping circles of yellow, green, and red, representing the interlocking identities affected by climate change. With this mural, Jones showcases the intrinsic connection between environmental and social justice; “a reminder and warning of […] the potential dangers affecting future generations of marginalized communities.” Intersectional Environmentalism utilizes bold, graphic imagery and the power of a young girl’s gaze to impel a more inclusive environmentalism. 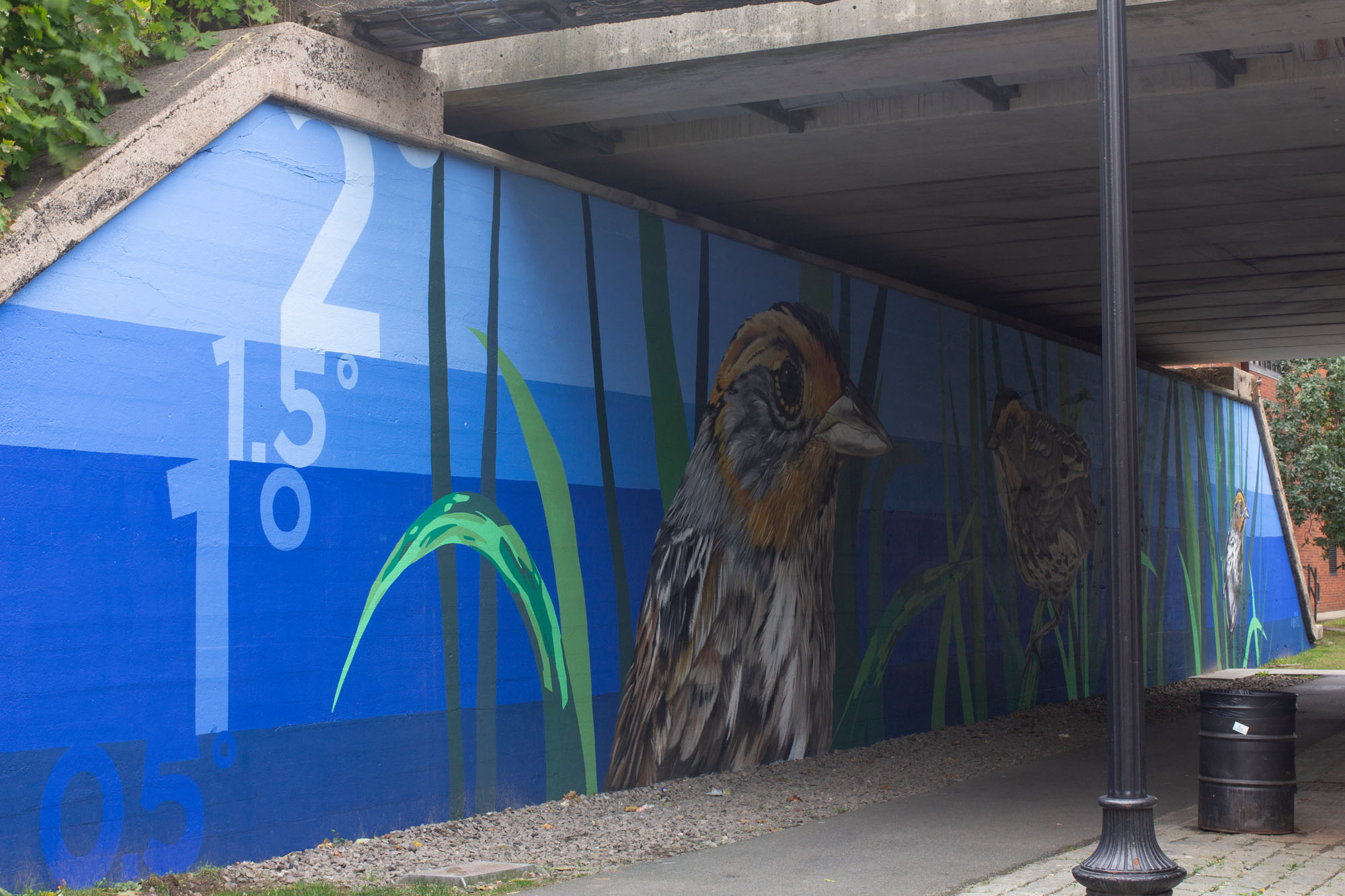 Some Sea Walls murals integrate statistics, but in a tangible and impactful way that causes viewers to lean in rather than avert their gaze. Sophy Tuttle (above), a Boston local, created Rising Tides on the iconic East Boston Greenway, a walking and biking path that extends from the harbor to the airport and beyond. The Greenway lies slightly below sea level, and the mural delineates the place on the wall to which the sea level will rise with each 0.5°C rise in global temperature. The artist calls this “a form of data visualization that creates an embodied experience from abstract climate numbers.” Alongside the sea level markers, the mural depicts three Saltmarsh sparrows in tall grass. Saltmarsh sparrows currently nest in East Boston’s Belle Isle Marsh, but they will disappear from the area within 50 years due to rising tides displacing their natural habitat. In its entirety, the mural hyper-localizes the impacts of sea level rise, and showcases the beauty of a creature that will ultimately be lost to the climate crisis.

For HarborArts’ director Matt Pollock, the Sea Walls partnership is just the beginning. Plans for a collaboration with Eastie Farm and Boston Public Schools are taking shape in 2022, with a program connecting farming activities, artistic thinking and creation, and students’ cultural heritages. Curated by Felipe Ortiz, who contributed two murals to the Sea Walls project, this new collaboration will result in a series of murals on BPS property envisioned by 4th graders and brought to life by professional artists.

“The initiative is growing,” says Matt Pollock, “and we’re looking for strategic partnerships to enhance the work and increase our impact on the community.” Business and non-profit leaders looking to get involved with HarborArts can contact Matt at matt.harborarts@gmail.com.

Like most public art, photographs do not do justice to the size and craftsmanship of the Sea Walls murals. These pieces are a wonder to behold, especially during a beautiful spring or summer day in East Boston.

Visit the map on Sea Walls’ Boston page to take a self-guided tour.