“[Roxbury] is a place for me that’s very dear. I want to be an ambassador for the neighborhood.”

The year was 2014 and Collin Knight had just moved back to Boston from NYC with his wife and young daughter. Born and bred in the city’s Roxbury neighborhood, Knight heard from many neighborhood elders upon his return. Many were frustrated with the way in which the area was represented in the media and in conversations outside of the neighborhood. He wondered how he could do his part to change the narrative and bring people into the place that had nurtured and supported him through the years.

Though Knight had spent some time away, previous to that, he was deeply embedded in his community–having spent years working in the Boston Public School system as a paraprofessional, teaching theater arts. Given that, he was well aware of the neighborhood’s gifts and its challenges. He also knew how to use the arts as a way to establish connections and build trust.

While Knight was in NYC working as an actor, he also worked as a local tour guide for his adopted city. So he had a lightbulb moment: why couldn’t he bring something similar to his hometown–but with a twist: instead of highlighting typical tourist spots, he could put the spotlight on Roxbury in effort to change any preconceived notions about the neighborhood. What would be his hook? Spotlighting the vibrant cultural landscape of the area through food and public art.

In a city like Boston–a place that welcomes a high volume of visitors every year (according to the Greater Boston Convention and Visitors Bureau, an estimated 22.7 million people visited the city in 2019)–tour companies abound. But only one of these focuses specifically on the food and culture of Boston’s Roxbury neighborhood: Knight’s Live Like a Local Tours.

“My business model is built on a platform of social justice. It is important for me to be an ambassador for Roxbury, and also to work to circulate dollars in Communities of Color,” Knight says. “I have pride in my neighborhood and I want people to experience why. They may hear negative things on the news, so I feel it is my job to dispel that perception and show them that we are what you call a community too.”

One way Knight engages tour participants is through food. “The food aspect is really appealing to people who haven’t tasted some of these flavors in their own homes or on their own Main Streets. And while I am exposing folks to something new, I am also helping to drive business to communities that perhaps wouldn’t otherwise see the same traffic. Many people then come back for return visits, and I love hearing that!”

Another feature of Knight’s tours is his emphasis on the cultural and artistic history of Roxbury. “For me, the arts are really important because they provide another opportunity to be creative and also to bring people together and focus on the things that they share rather than the things that make them different.”

Knight’s tours range from private to small-group and in addition to the neighborhood’s cultural offerings, they feature his own summary and synthesis of the area’s history–all told with an actor’s flair and infectious smile. He has led Boston tourists through his home neighborhood as well as larger groups–like graduate students from the Harvard School of Public Health or on a recent tour, employees from the North American headquarters of footwear and athletic company Puma. All come away with a new appreciation for Roxbury and its diverse offerings.

Speaking about the choice of his path of entrepreneurship, he reflects that it is an opportunity for him to “really speak [his] truth as an African-American man. Our perspective isn’t being told and heard as often as it should.”

He pauses for a moment. “At the end of the day, I just want to do three things: support, teach, and elevate by being a good citizen,” he says. 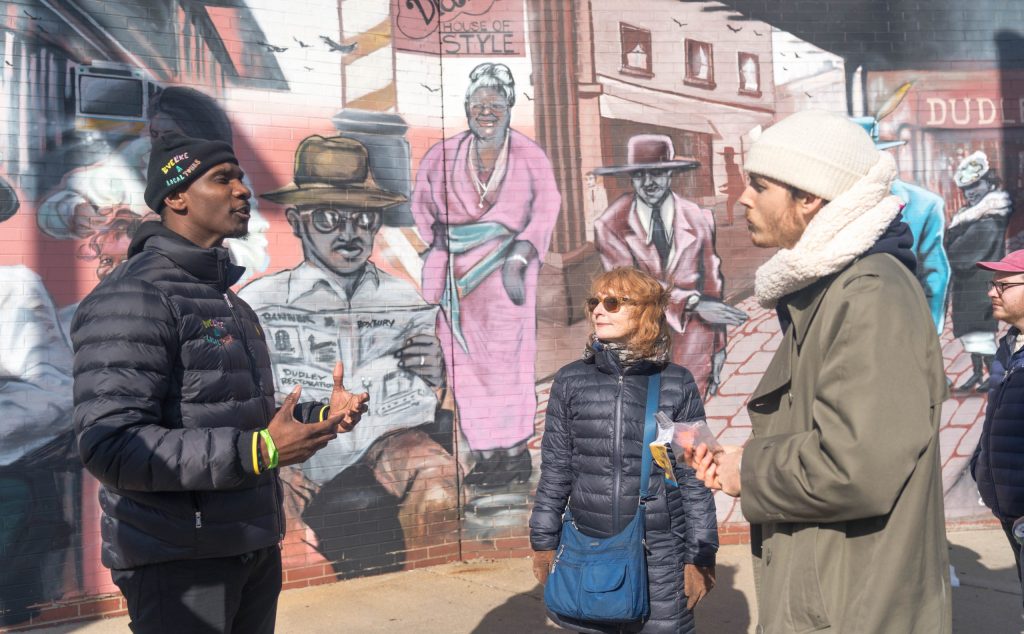 Knight with tour guests in front of the “Faces of Dudley” mural on Washington Street in Roxbury.

Check out these local establishments that are featured on Knight’s tours:

Slade’s Bar and Grill–A staple of Lower Roxbury, and once owned by Hall of Famer and former Boston Celtic Bill Russell, this establishment has been in continuous operation since 1935 and is known for its soulful vibe as well as its wings.

Soleil-For a homestyle breakfast or lunch with a Southern flair, visit Cheryl Straughter’s Nubian Square gem. And if, like me, you are a chicken sandwich connoisseur, try the “Cluck This.”