By Amy Carleton
Posted November 9, 2022
In Arts Activism, Diversity and Inclusion, LGBTQ, Things To Do
0
0 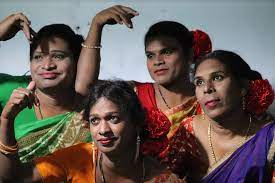 Open dialogue is the most important step in bringing about change and facilitating social inclusion. Given that, SETU’s upcoming production “Seven Steps Around the Fire” is a step towards bringing justice and social inclusion to the Hijra (Indian Transgender) community in South Asia. In an effort to include real-life experiences in the discussion to understand this complex issue, we have invited Anjali Rimi, LGBTQ+ activist and President of Parivar, America’s only Transgender-led, Transgender-centering South Asian Queer organization to help the Hijra community in India to get education, medical care, and employment opportunities.

Often called the “third gender,” evidence for Hijra existence in Hindu society can be found in Hindu holy texts like the Ramayana and the Mahabharata. The third gender had a special place in Hinduism; even Shiva is worshipped in the form of Ardhanarishvara (half man, half woman). Hijras worked in court and various facets of administration during Mughal-era India. However, during the 19th century under colonial rule, British authorities sought to eradicate and criminalize the Hijra community through various laws. These laws were later repealed after India attained independence, but the Hijra community struggled to be accepted as an integral part of the society.

Hijras are often born male but present in traditionally feminine ways.  Many, but not all, choose to undergo a castration ceremony.  Other hijras are born intersex.  Often called transgender by outsiders, Indian society and most hijras consider themselves to be the third gender—neither male nor female, not transitioning.  However, hijra identity is complex, and recently, some have identified as transgender and sought gender reassignment procedures, they are still considered a secretive and outcasted group.

Hijras are hard to miss in India. Dressed in glittering saris and heavy makeup, they stand through crowded intersections stopping cars and knocking on windows with the edge of a coin and offering blessings. They dance at temples. They crash fancy weddings and birth ceremonies, singing Bollywood songs and asking for tips. Even though they seem joyful and empowered in action, they have historically been denied basic human rights such as access to education, housing–not to mention love and marriage.

India has come a long way–even legalizing homosexuality and accepting the third gender in recent years, but the Hijra community is still the victim of abuse and discrimination. Violence and hate crimes against the community are common, as are housing and other discrimination.  Many movies, books, and plays are written to bring justice to this community. The play “Seven Steps Around the Fire” written by Mahesh Dattani and directed by Subrata Das, discusses social issues and oppression faced by this community through the vehicle of an engaging murder mystery thriller. The name of our theater company–SETU–means “bridge” in several Indian languages and our mission is to build bridges between Indian and Western cultures through the medium of theater.

About the author: Dipali Trivedi is an MIT graduate and a serial entrepreneur who loves to run, hike and travel. She is co-founder and executive at Everyday Life, a FinTech startup that serves middle-income families with innovative insurance products and financial planning. She volunteers for various non-profit organizations in USA, India, and Africa, and is an influencer for Women in Tech. She lives in Belmont with her husband and kids.